This is a quick update on markets and models.

As you know, markets swooned in April, May and June, culminating in a nearly 12% loss for average Canadian investors in global stocks at the deepest stage of the decline. Market risk doubled between April and June as measured by standard volatility measures.
The three primary risk management layers in our models were extremely effective during this period:
Models, and hence client portfolios, are essentially flat from their peak in April. We are currently over 90% cash and bonds, and awaiting fresh signals.
Whither Markets?
That said, we are on the verge of something meaningful happening. We are currently managing three scenarios:
Models are currently positioned for scenario 1, but we will know if the next day or so whether we need to position short-term for Scenario 2. Our long-term trend indicators will then provide direction at the end of July so that we can position for a possible Scenario 3.
It is important to remember that it is not enough for the economy, or the companies that operate within it, to deliver strong results. If the participants in the market are already expecting strong results, then the economy must do even better than expected to drive markets higher. John Maynard Keynes draws a worthwhile comparison with a beauty contest:

“It is not a case of choosing those [faces] that, to the best of one’s judgment, are really the prettiest, nor even those that average opinion genuinely thinks the prettiest. We have reached the third degree where we devote our intelligences to anticipating what average opinion expects the average opinion to be. And there are some, I believe, who practice the fourth, fifth and higher degrees.” (Keynes, General Theory of Employment Interest and Money, 1936).

We are thus awaiting signals based on actual capital flows to determine whether average market participants are more impressed, or less impressed than they expected to be. In investing, the large drives the small, so we focus on the biggest, most liquid, most important markets around to judge major changes in trend. It has been the case since 2003 that Asian markets have driven global growth, and this is no less so today. Given the amount of debt (leverage) in the system, Asian growth trends are even more important today than ever. Thus, we are focused on the strength of a basket of Asian currencies (excluding the Japanese Yen), as an indicator of broad Asian growth. The chart for this index is below (Chart 1.)
Chart 1. Asian Dollar Index 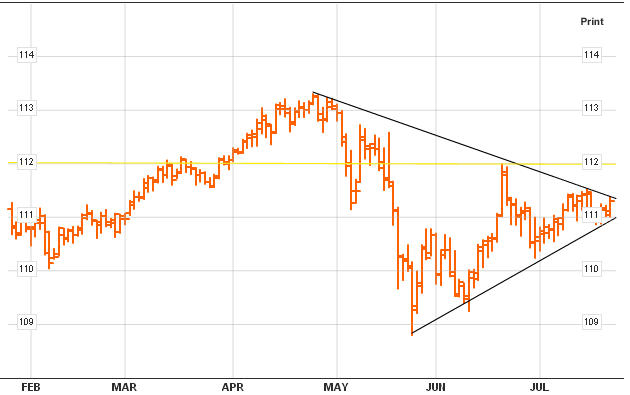 Source: Bloomberg, Butler|Philbrick & Associates
Note that this index of Asian currencies has been moving sideways since late April. Should the index break through the upper trend-line near 111.50, this would trigger Scenario 2 by sending a meaningful signal that markets are prepared to allocate capital to growing Asian countries, and this would be a positive signal for markets. We would layer into model positions for Aggressive clients on a break of this line. A break of the 112 line would signal Scenario 3 represent a higher intermediate term high for the index, and send a strong signal of a sustainable up-trend, and would lend confidence to a decision to reinvest cash in all client portfolios.

The exchange rate between the Australian dollar and the Japanese Yen has been an excellent indicator of investor confidence in global growth, as Australia is a major provider of commodities to the Asian growth countries, while Japan is a net importer of nearly every commodity. This indicator has also been consolidating since late April. A break of the upper trendline (Chart 2.) would signal Scenario 2, confirming renewed optimism in global growth, and would lend further confidence to our decision to reinvest client cash. A close above 78.60 would confirm this new up-trend defined by Scenario 3.

Source: Stockcharts, Butler|Philbrick & Associates
Last, but certainly not least, the U.S. Treasury market has indicated a high degree of skepticism regarding the very recent optimism as reflected in rising stock prices. The debt markets swamp the equity markets in terms of size and sophistication, so we watch Treasury yields closely for confirmation of stock and commodity price moves. So far, Treasuries have NOT confirmed the recent stock price rally, so we would like to see Treasury yields break the upper trendline (Chart 3.). A break of this upper trendline would signal Scenario 2. If U.S. Treasury Yields trade above 3.10% (31 on the chart below), we would interpret that as a final trigger for Scenario 3.